Why am I posting a copy of my car insurance policy online?  To illustrate a point.  Also, I’m fairly confident that I’ve blurred out all of my personal information. 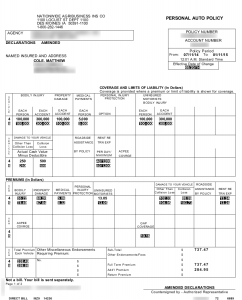 Recently, my wife and I purchased a new car.  Since we purchased it from a dealership, we had to go through the rigmarole of listening to all their different sales pitches (which were delivered to us by no less than three people) — maintenance packages, rust protection, paint treatments, etc.  We had dealt with these types of pitches a couple years ago, when we purchased our previous car, so it was nothing new.

What was new, however, was this thing called “gap coverage”.  I’d never heard of it before, as it had never been offered to me with any of my other automobile purchases.  If you’re not familiar with gap coverage, here’s the gist of it: if your car gets totaled, and the amount the insurance company gives you is less than what you owe on your loan, gap coverage pays the difference (so that you’re not stuck with a loan on a car you can’t drive).

The dealer tried to offer us the gap coverage, along with a maintenance package, for $1,000.  Initially we declined it, because we were trying to stay within a budget and this would have put us over our budget.  When we declined this, however, the dealer tried to split it up — $750 for the gap coverage, and $250 for the maintenance plan.  The maintenance plan made sense — it covered the next nine oil changes at a price that was cheaper than what I normally pay for the same thing on my current car — and we also managed to get them to come down a little bit more on the price.  The gap coverage, however, was something we couldn’t stomach — so we turned it down, despite the dealer’s insistence that it could not be added later.

A couple days later, our new car was brought in from a dealership in Missouri, and we drove it home.  When I called up our insurance agent to let them know we had purchased a new car, they asked if I wanted gap coverage.  I asked how much it was, and I was astonished when the answer came.

Go look at the image — it’s right there under “gap coverage”.  Go ahead, take a look.

I don’t think the dealer was trying to con me — and it’s for that reason that I’m not mentioning any specifics as to who it was.  I think that they simply picked something that had a healthy markup to it while at the same time wasn’t so expensive that no one would buy it.  They’re a business, and they’re trying to make money, so on that front, I can’t blame them.  The problem with insurance policies is pricing — price it too high, and you’ll make a healthy profit margin off each one you sell, but no one will buy it; price it too low, and your chances of selling it increase dramatically, but you won’t make any money off it.  In our case, they simply priced it too high.

Update (9/15/2014): Someone pointed out to me that gap coverage is really only necessary for about the first two years that you own your car.  The reason for this is that after about two years, you’ve paid off enough of the loan to where your car is actually worth more than what you have left to pay on your loan — and since traditional (non-gap) insurance covers what your car is worth (which would be more than the loan at this point), gap coverage becomes worthless.  Under this logic, I could cancel my gap coverage after two years and only pay $40.64 for it — a whopping 95% savings over what the dealer is asking.