The last few weeks have been pretty stressful for me.  I have a number of assignments I’m trying to get done in school, and there’s currently 9 days of school left.

Last night, I had some reading that I needed to do for one of my classes.  I have trouble concentrating on textbook reading, but I’ve found that walking on the treadmill helps me to concentrate.  (And hey, if I lose a few pounds in the process…)  So I walked…for almost 3 hours.  I walked 7.9 miles total.  That’s how long and dry this textbook reading is.

When emerged from my basement, I went upstairs and found my son trying to make Easy Mac out of a regular box of mac and cheese.  He had put the macaroni into a drinking glass, filled it with water, and was about to put it in the microwave for 3 1/2 minutes.  I quickly put a stop to it — partially because I could see third-degree burns in his future, but also because we were out of milk.  He was determined to try, however, so we took a trip to the grocery store.

Most of this trip went uneventfully.  It wasn’t until after I had made it past the checkout line that the most amazing thing I think I’ve ever seen happened.

My son brought some of his change along with him, which he spent the way most 6-year-olds do — no, not on prudent investments in long-term growth companies…he spent it on candy.

As I was checking out, he wandered off and found a collection of vending machines sitting over by the exit.  These were the simple kind  of vending machine — the kind where you stick a quarter in, turn the handle, and it usually dispensed some small amount of candy, or a bouncy ball, or a little plastic container with stickers inside.  (You know what I’m taking about.)  Out of the corner of my eye, I saw him making the final turns on one machine that had some rather large bouncy balls in it — big enough that it required two quarters instead of one — but when he got finished turning it, nothing came out.  I felt bad for him, so I went over to the cashier, explained what happened, and got his 50 cents back.

By this point, he had wandered out into the entryway.  This part of the store had actual vending machines — mostly just pop machines — and one claw machine.  I walked out to him and gave him the 50 cents that I had reclaimed for him.  He took the two quarters from me, spun around, and immediately set his sights on the claw machine.

When I saw him go for the claw machine, I was puzzled.  I was sure he would have used it on a can of pop, because let’s face it — the pop machine always dispenses a cold can of tasty beverage that’s loaded with sugar.  On the other hand, the claw machine — at least in my experience — only dispenses sadness and disappointment.

This impending disappointment did not stop him, however.  He quickly shoved his two quarters into the machine, steered the claw over to one of the stuffed animals, and hit the button.  I watched as the claw lowered itself down — but it snagged the animal on the side, instead of head on, and it rolled over onto its side.  The claw continued to lower, however, and just as I thought he was going to come away with nothing, the claw broke free of the other stuffed animal, and went straight for a bright blue and orange stuffed animal that was sitting right next to it.  The head was the only thing I could see of this one, but the claw closed in on it, pulled it free from its neighbors, and carried it all the way to chute.

I was in disbelief.  I normally stay away from claw machines, because all they do is take my money and give me nothing in return for it (much like my congressmen).  And yet, my six-year-old son, in one attempt, had succeeded where I so often had failed.  I bowed to his superior abilities, and took him over to Burger King to get a victory cheeseburger. 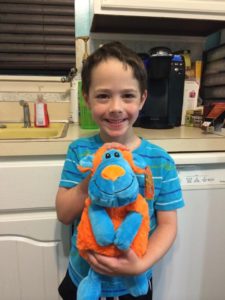 Fortunately, this whole episode made him completely forget about turning mac and cheese into Easy Mac.